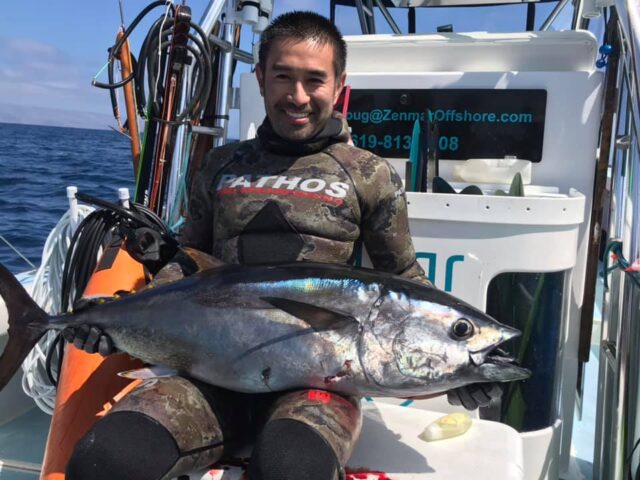 Always eager to help out fellow club members and expand his knowledge of the sport Hide has gone from a novice diver to a very experienced Spearo since he made the jump from SCUBA to freediving in 2008.  Hide discovered the sport after visiting Spear America where on his first visit he signed up for the Fii level 1 class with our own Jeremy Caulkins.  Since that time he has speared in many places up and down the coast, made multiple successful trips to Baja, BOLA, and other spear destinations.  He has taken fish from starting from the common Opal Eye and sheepshead, to Yellow Tail, Blue Fin Tuna and sizable Groupers.  Hide is a great fit for the club and has much to offer the guys and gals who are just entering the sport.  Hide has already started creating events for our members such as the dive trips, the catch and cook, and CPR classes.  We are excited for the new energy he is brining to the table and am sure he will serve his position with vigor and honor. 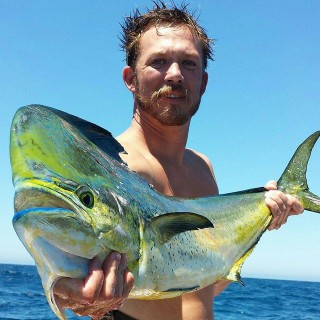 Having grown up in the North West I spent much of my youth on the Oregon Coast and in the waters of the numerous Rivers and Lakes Oregon has to offer.  After moving to Southern California in 2004 I was quickly introduced to Freediving for Lobster by a good friend.  That in turn, opened my eyes to all that is awesome with the waters outside Southern California.  In the years since, I have taken each opportunity I get to spend it out on the water with friends searching for whatever game can be found to put food on the table, and to create a life full of memories.  I currently have a small boat that makes frequent trips to Catalina Island, often for the entire weekend.  My wife and two daughters are always happy to see me come back, and like to inspect the days catch.  Some of my favorite species to hunt are Calico Bass, Yellow Tail, and the Spiny Lobster.  I could literally get by all year just targeting these.  Lucky we have so many different species to target the dinner plate is often filled with something else just as tasty.  I dabble in a little gun building in my garage and really enjoy that as well.  There is something special about building a gun and then bringing home dinner with it later.  Very satisfying.  Since finding a home with the OC Spearos I have enjoyed many meetings and especially enjoy getting to see the young Spearos get into the sport knowing nothing then watching them find the validation of hard work at the end of a spear. Good stuff.  I look forward to many seasons under the banner of OC Spearos.
Contact Myrran McKeen at: myrranmckeen@gmail.com 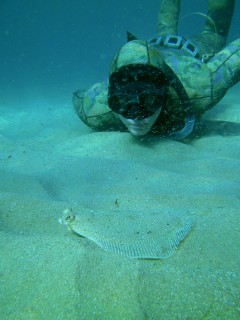 Eric Jensen, son of Poseidon, emerged from the oceanic depths clutching a hammerhead shark in his right hand, and a moray eel in this left.
After such an epic introduction to the world, Eric has since fostered a supreme passion to become an assassin of the water.  Having dived the Sea of Cortez, Fiji, and the Coral Sea, Eric believes to have left his heart in Tonga.  He’s waltzed with whale-sharks, hula’d with humpbacks, and sashayed with sea turtles.
His preferred target species is  the elusive sea horse.  With a personal best free-diving depth of one hundred feet and armed with his weapon of mass fish-struction, Eric Jensen remains an aquatic force to be reckoned with. 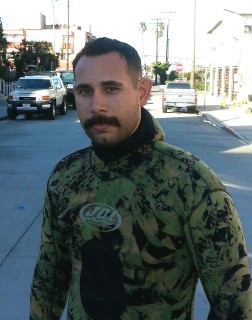 Ever since I can remember, I have loved fishing. As the years passed I became more addicted to fishing and eventually I took a position at Davey’s Locker Sport Fishing in Newport Beach just so I could fish for free. This made me a proficient and skilled sport fishermen and I could always be counted on to fill the family freezer. Deep sea fishing was my passion, until the summer of 2008. That summer my friends and I spent a lot of time at the beach and we would see these guys in snorkeling gear and long yellow poles coming out of the surf. So I went out and purchased the gear and the following weekend I went out at Treasure Island (now closed due to MLPAs) with a snorkel and pole spear in hand and took my first fish – a small black perch. You wouldn’t believe how proud I was of myself. I’ve been catching fish in the 10lb to 80lb range my entire life yet this 8oz fish made me prouder than the rest. My friends and I were hooked on the sport. In the fall of 2009 we saw the need for a spearfishing club in Orange County to educate the public about spearfishing, to sustain the local fisheries and environment, and to unify spearfishers in the greater Orange County area. In April 2010, OC Spearos was officially started and continues to grow today.
Contact Fernando at: fernie8884@yahoo.com