The OC Spearos would like to thank all the competitors and spectators who came out to support the 2017 OC Classic Spearfishing Tournament & Raffle. We’d also like to thank our Amazing sponsors, especially Petros & Spear America for always supporting the Spearfishing community.

The OC Classic was the largest Spearfishing Tournament in Southern California history with 121 spearos competing to become Tournament Champion and over 300 hundred people in attendance for the weigh-in and raffle.

Congratulations to our top 5 competitors for succeeding in such a huge field of competitors & varying conditions!

Words from the President:

The 2017 OC Classic was our most successful tournament ever.  We had a tremendous amount of support from our sponsors and had a huge showing in the number of competitors that entered the event.  While other tournaments this year have had a relatively small showing the success of our event is telling me we are doing something right down here in Orange County Ca.   It’s been a real pleasure to be the president of this fine club and I get a sense of satisfaction from the success, especially after the huge effort our board members made to make this event stand out.  I am very proud of the team we have assembled and they have shown that they can do big things with very limited resources.  Over the past years I have seen the OC Spearos begin to transform from a motley crew of spearing buddies scratching a clawing to get sponsors to the largest spearfishing club on the west coast.  We plan to continue our efforts to provide a platform where our local divers can continue to grow in this sport.  Long live the OC Spearos!

Launched the boat out of Huntington early in the morning and headed to the oil rigs outside of San Pedro. Suited up, got in the water, and my first dive down a pair of yellowtail swam by at about 30 feet. I lured one close enough, with the open-close hand motion, and took a shot with 120 Pathos carbon and slip tip. With the current blowing toward the rig, the yellow wrapped once around a horizontal pilon despite my efforts to keep it off. Sea lions were immediately bombing on the fish. I quickly called my buddy William over to watch my back, took a breath and punched back down. I was able to free the yellow and keep it from wrapping again, sea lions trying to steal it all the way to the surface, and back to the boat.

A after some time, and trying to avoid sea dog company, I spotted a large female Sheephead. Stoned her, so there was no issue with wrapping up in the rig again, and got the fish to the boat quickly.

Later we moved to a local reef and I took a decent size opal eye that I though would tack a couple extra points to my score as my third fish, and headed to the weigh in at Spear America. Made it with about 10 minutes to spare.

I weighed in my fish and after a few beers, and mingling with club members, I had completely forgotten my catch/score nor did I expect anything.

Hearing my name being called to come stand on the 2nd place podium was probably the best surprise of my life. I’m still floating on cloud 9 from the stoke!

A huge thanks to Spear America, Oc Spearo’s, and all who competed!

2017 OC Spearos
Classic dive
After teaming with Lauren for the US Nationals, Lauren and I have really been having a good season training and diving together, and we wanted to take the momentum and carry it to the OC Classic. We dove different boats the week prior for the Scrambles Meet, and it told me a lot about what my strategy should be for the upcoming event. We had a little more time to work with, and this weighed heavy on my mind- where to go?
Lauren secured a boat for us, and the thought was to div SCI early, and look for paddies on the way back. But word on the docks was the paddies dried up, and SCI had fish but they were being stingy. After discussing a bit more about the speed and size of the boat, I realized that we had 4 divers, not 2, and the boat would be stressing to carry that load for a long distance run; and if we had rough water, it would be slow going. We decided to tow the boat from Dana to HB harbor, and maximize time available.
First stop, we knew this was our better shot at pelagics. There were some YT around, and we stood a good chance to get into them without burning the clock. Aaaannnd, She’s ON! Lauren had her first yellowtail ever, and I was really happy this was how the day started. I saw a couple, and quickly backed her fish up with one. Will and Jose did not cross paths with them, so they worked on some reef fish, as Lauren and I went about working to secure a second fish before we ran off.
Next stop was a good kelp bed, it had a lot of small WSB in it; I passed on several legal, 6-7lb fish, hoping for a 10-20lb fish to show itself. The bed already had 2 other divers in it before we showed up, and yet another 2 jumped the spot. Too much volume of people in a small area, and it shut down on us. (Shoulda taken one of the 7lb seabass…..)
Last stop was the long rockpile….. saw a giant goat who knew me pretty well, and he kept his distance. I connected a couple other fish, but I knew- while it wasn’t enough to knock it out of the park, the strategy had played well, Lauren and I dove very well and did not miss when it counted, and I knew we were in contention. We had a comfortable amount of time, so our planning was good all the way around.
I about died when I heard Fernando say “Lauren, Paul; I don’t know how to say this, but you have a tie.” WOW! I guess teamwork really DOES pay off! By virtue of her T being larger, Lauren took 2nd place, and I was 3rd. A great finish for us, I was really happy with the dive, and of course, Austin getting some redemption for being nixed by only a couple points in the Scrambles meet the week prior- he was out for some redemption. And the entire event, the party, the food, the prizes, what a great day! Thank you to the OC Spearos for having us, it was a great time! 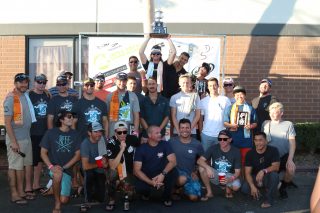 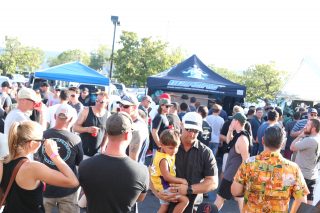 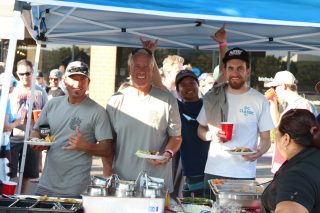 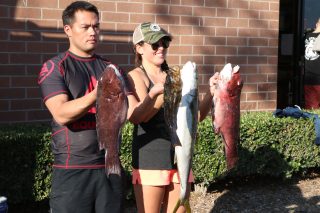 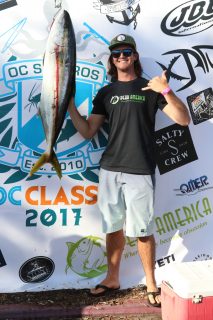 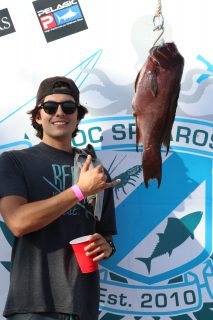 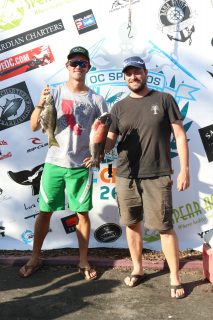 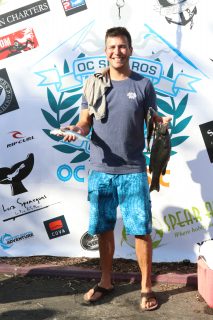 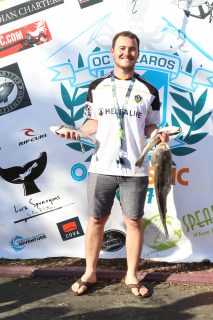 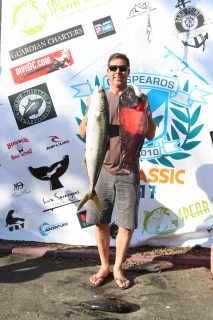 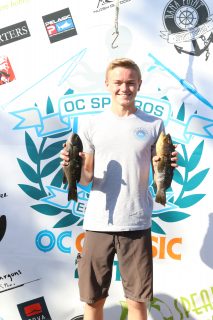 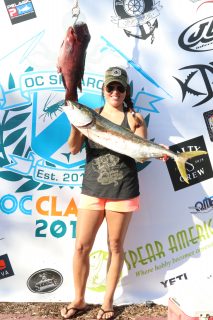 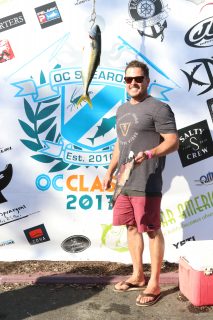 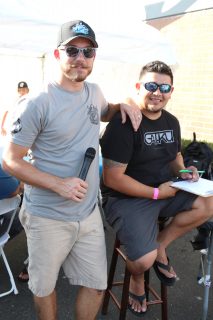 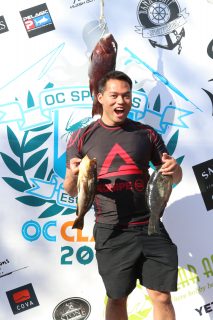 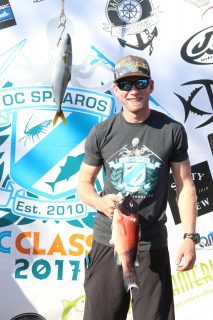 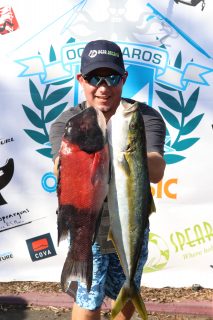 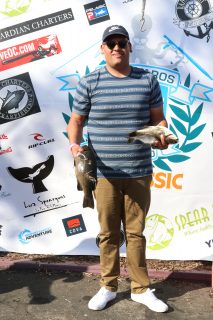 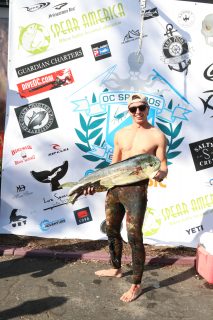 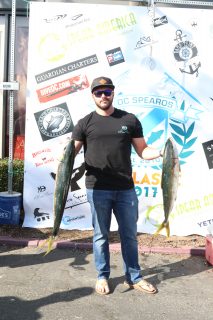 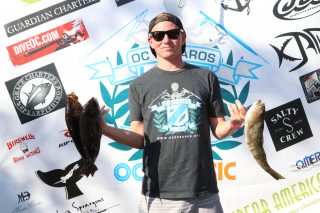 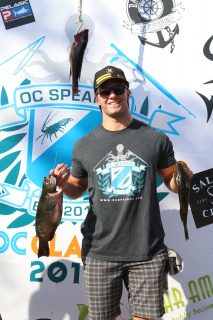 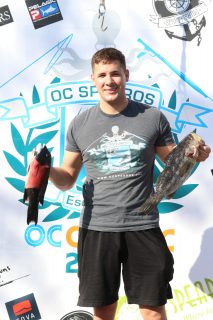 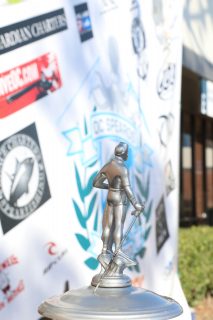